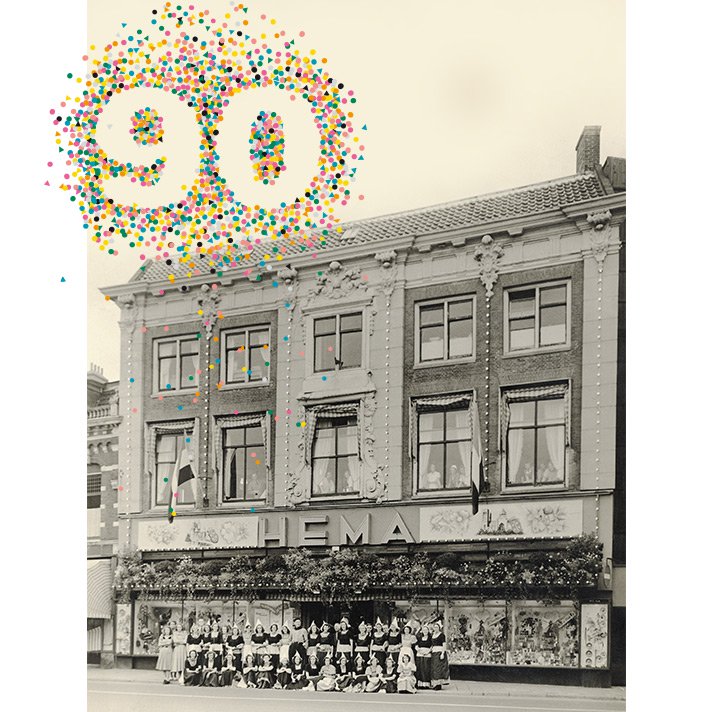 The 4th of November 1926 will remain a special date in the HEMA history books as this is when the Hollandsche Eenheidsprijzen Maatschappij Amsterdam, quickly known as HEMA, opened its very first department store. Located in central Amsterdam, its prices were based on the successful dime store principle; all of the items for sale were priced at 10, 25 or 50 cents.

The simplicity, quality and affordability of these items were appealing to all. It wasn't long before HEMA-items could be found in all kinds of households, from working to upper class.

This success led to a HEMA store opening outside of Amsterdam in 1927 and just one year later HEMA could boast a number of 10 stores spread across the Netherlands.

Leaping forward to 1958, HEMA picked up the pace of its expansion, rapidly opening new stores all across the country. Then in 1984, international expansion started with the first HEMA store opening abroad, in Belgium to be precise. Since then HEMA has grown into the international retail organisation it is today, with stores in the Netherlands, Belgium, Luxemburg, Germany, France, the United Kingdom and Spain.

90 years of HEMA in a nutshell

HEMA uses cookies and comparable technologies to offer you an optimal visitor experience, to offer you relevant advertisements, and to track your surfing activity. These cookies enable HEMA or its third-party affiliates to monitor your surfing activity within this website and on third-party websites. This makes it possible for HEMA to adjust advertisements to reflect your interests and enable you to share your information via social media. By clicking on “OK” or continuing to use this website, you are agreeing to HEMA’s use of cookies and comparable technologies. You can change your cookie settings here >. To find out more about why we use cookies or how to disable them, for more information click here >

By continuing to browse the website, you are agreeing to our use of cookies and similar techniques. These cookies enable us to collect personal data, allow us and third parties to track your online behaviour to show ads based on your interests, and make it possible to share content on social media. You can change your cookie settings here

want to stay in the know about all things HEMA?

Then subscribe to our newsletter, and be the first to know about our latest collections & promotions!

You’ll receive confirmation of your subscription in your inbox. Can’t find it? Check your spam.

Please choose a country and language.

You have automatically been redirected, based on your location to this site.